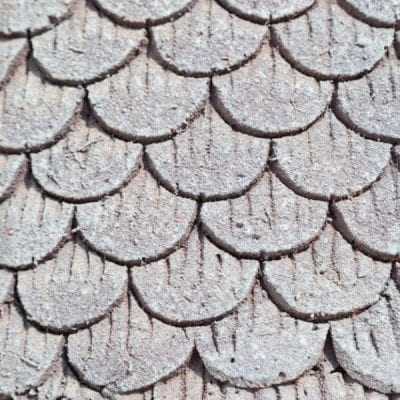 Asbestos is a set of six naturally occurring silicate minerals, which all have in common their eponymous asbestiform habit: i.e. long (roughly 1:20 aspect ratio), thin fibrous crystals, with each visible fiber composed of millions of microscopic “fibrils” that can be released by abrasion and other processes. They are commonly known by their colors, as blue asbestos, brown asbestos, white asbestos, and green asbestos.

Asbestos mining existed more than 4,000 years ago, but large-scale mining began at the end of the 19th century. When manufacturers and builders began using asbestos for its desirable physical properties. Some of those properties are sound absorption, average tensile strength, affordability, and resistance to fire, heat, and electricity. It was used in such applications as electrical insulation for hotplate wiring and in building insulation. When asbestos is used for its resistance to fire or heat, the fibers are often mixed with cement or woven into fabric or mats. These desirable properties made asbestos very widely used. Asbestos use continued to grow through most of the 20th century until public knowledge of the health hazards of asbestos dust led to its outlawing by courts and legislatures in mainstream construction and fireproofing in most countries.

Inhalation of asbestos fibers can cause serious and fatal illnesses including lung cancer, mesothelioma, and asbestosis (a type of pneumoconiosis). A concern of asbestos-related illness in modern times began with the 20th century and escalated during the 1920s and 1930s. By the 1980s and 1990s, asbestos trade and use were heavily restricted, phased out, or banned outright in an increasing number of countries.

Despite the severity of asbestos-related diseases, the material has extremely widespread use in many areas. Continuing long-term use of asbestos after harmful health effects were known or suspected, and the slow emergence of symptoms decades after exposure ceased, made asbestos litigation the longest, most expensive mass tort in U.S. history through a much lesser legal issue in most other countries involved. Asbestos-related liability also remains an ongoing concern for many manufacturers, insurers and reinsurers. On July 12, 2018, a Missouri jury ordered Johnson & Johnson to pay a record $4.69 billion to 22 women who alleged the company’s talc-based products, including its baby powder, contain asbestos and caused them to develop ovarian cancer.

Asbestos derives from the ancient Greek ἄσβεστος, meaning “unquenchable” or “inextinguishable”. The name reflects the use of the substance for wicks that would never burn up. The word is pronounced /æsˈbɛstəs/, /æzˈbɛstəs/ or /æzˈbɛstɒs/.

Six mineral types are defined by the United States Environmental Protection Agency (EPA) as “asbestos” including those belonging to the serpentine class and those belonging to the amphibole class. All six asbestos mineral types are known to be human carcinogens. The visible fibers are themselves each composed of millions of microscopic “fibrils” that can be released by abrasion and other processes.

Chrysotile, CAS No. 12001-29-5, is obtained from serpentinite rocks which are common throughout the world. Its idealized chemical formula is Mg3(Si2O5)(OH)4. Chrysotile appears under the microscope as a white fiber.

Chrysotile has been used more than any other type and accounts for about 95% of the asbestos found in buildings in America. Chrysotile is more flexible than amphibole types of asbestos and can be spun and woven into a fabric. The most common use was corrugated asbestos cement roofing primarily for outbuildings, warehouses, and garages. It may also be found in sheets or panels used for ceilings and sometimes for walls and floors. Chrysotile has been a component in joint compound and some plasters. Numerous other items have been made containing chrysotile including brake linings, fire barriers in fuse boxes, pipe insulation, floor tiles, residential shingles, and gaskets for high-temperature equipment.

Amosite, CAS No. 12172-73-5, often referred to as brown asbestos, is a trade name for the amphiboles belonging to the cummingtonite–grunerite solid solution series, commonly from South Africa, named as a partial acronym for “Asbestos Mines of South Africa”. One formula given for amosite is Fe7Si8O22(OH)2. Amosite is seen under a microscope as a grey-white vitreous fiber. It is found most frequently as a fire retardant in thermal insulation products, asbestos insulating board, and ceiling tiles.

Crocidolite, CAS No. 12001-28-4, is the fibrous form of the amphibole riebeckite, found primarily in southern Africa, but also in Australia and Bolivia. One formula given for crocidolite is Na2FeII
3FeIII
2Si8O22(OH)2. Crocidolite is seen under a microscope as a blue fiber.

Crocidolite commonly occurs as soft friable fibers. Asbestiform amphibole may also occur as soft friable fibers but some varieties such as amosite are commonly straighter. All forms of asbestos are fibrillar in that they are composed of fibers with breadths less than 1 micrometer in bundles of very great widths. Asbestos with particularly fine fibers is also referred to as “amianthus”.

Other natural asbestiform minerals, such as richterite, Na(CaNa)(Mg,FeII)5(Si8O22)(OH)2, and winchite, (CaNa)Mg4(Al,FeIII)(Si8O22)(OH)2, though not regulated, are said by some to be no less harmful than tremolite, amosite, or crocidolite. They are termed “asbestiform” rather than asbestos. Although the U.S. Occupational Safety and Health Administration (OSHA) has not included them in the asbestos standard, NIOSH and the American Thoracic Society have recommended them for inclusion as regulated materials because they may also be hazardous to health.

Asbestos use dates back at least 4,500 years when the inhabitants of the Lake Juojärvi region in East Finland strengthened earthenware pots and cooking utensils with the asbestos mineral anthophyllite (see Asbestos-ceramic). One of the first descriptions of a material that may have been asbestos is in Theophrastus, On Stones, from around 300 BC, although this identification has been questioned. In both modern and ancient Greek, the usual name for the material known in English as “asbestos” is amiantos (“undefiled”, “pure”), which was adapted into the French amiante and Portuguese amianto. In modern Greek, the word ἀσβεστος or ασβέστης stands consistently and solely for lime.

The term asbestos is traceable to Roman naturalist Pliny the Elder‘s manuscript Natural History, and his use of the term asbestinon, meaning “unquenchable”. While Pliny or his nephew Pliny the Younger is popularly credited with recognizing the detrimental effects of asbestos on human beings, examination of the primary sources reveals no support for either claim.

Some archaeologists believe that ancients made shrouds of asbestos, wherein they burned the bodies of their kings, in order to preserve only their ashes, and prevent them being mixed with those of wood or other combustible materials commonly used in funeral pyres. Others assert that the ancients used asbestos to make perpetual wicks for sepulchral or other lamps. A famous example is the golden lamp asbestos lychnis, which the sculptor Callimachus made for the Erechtheion. In more recent centuries, asbestos was indeed used for this purpose. Although asbestos causes the skin to itch upon contact, the ancient literature indicates that it was prescribed for diseases of the skin, and particularly for the itch. It is possible that they used the term asbestos for soapstone because the two terms have often been confused throughout history.

Note: This article is informational only. When making purchasing decisions, conduct your own research.
For more information or support call us we are here to help you.