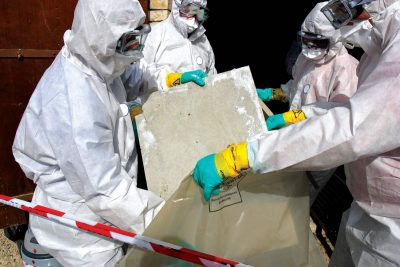 Why Is It Important to Handle Asbestos Safely?
January 28, 2020 By Olga Loreto
0

Asbestos exposure has been linked to several diseases, including malignant mesothelioma, asbestos-related lung cancer, and asbestosis. When asbestos becomes airborne, the toxic fibers cannot be seen with the naked eye, meaning someone can be exposed to asbestos fibers without knowing it. Fibers that have been inhaled or ingested may become lodged in the linings of the organs, including the heart, lungs or abdomen, causing health issues years later.

While asbestos use has declined due to extensive regulations, product bans and a shift toward safer alternatives, people still may be exposed to the toxic mineral through third-wave exposure caused by mishandling asbestos-containing materials. Third-wave asbestos exposure happens when someone is exposed to asbestos dust found in finished products, including construction materials, consumer goods, and other items.

Products that are in good condition and completely intact are largely considered safe but should be monitored for possible wearing or other damage. If damaged, those items are at risk of releasing asbestos dust into the air. In those situations, it is important to have an asbestos abatement company to assess the situation and, if needed, perform encapsulation or complete removal of those materials.

Where Can Asbestos Be Found?

Asbestos has been used in thousands of products, ranging from building supplies and automotive parts to consumer items like ironing board covers and protective clothing. According to the EPA, in 1985 about 20% of public and private buildings and residential apartment buildings contained friable asbestos. This estimate was made following a national survey to help the EPA create a comprehensive asbestos program to address the issue. The agency also noted that buildings constructed during the 1960s, when asbestos use was nearing its peak, are more likely to contain asbestos than homes and buildings constructed at other time periods.

Home construction projects from the 1930s through the mid-1970s often included asbestos-containing materials because they were durable and provided thermal insulation in areas that could face prolonged exposure to heat. In recent years, construction workers and homeowners alike have been exposed to asbestos fibers while performing renovations and remodels in older houses. Asbestos materials were used throughout older homes and can still be found today especially in basements, attics, and bathrooms.

Like many homes in the U.S., asbestos was also typically used in public buildings, private companies, and schools as a thermal insulator in areas where heat was a concern. Asbestos coatings were applied to metal beams as a fireproofing material and mixed into compounds and plasters used on walls and ceilings. In 1985, the EPA estimated that in 190,000 buildings, there were about 1.2 billion square feet of asbestos materials that had been sprayed or troweled on. The agency also noted that those materials contained an average of about 14% asbestos.

Asbestos can also enter the home in a secondary nature, as the mineral was used in numerous industries and is often accidentally brought home on a workers’ clothing, equipment or in their hair. Additionally, the toxin has been used in various old consumer goods, including hairdryers, crock pots, irons, popcorn poppers, ironing board covers, pot holders and oven mitts. Though the use of asbestos in these products ceased around the mid-1970s, some of these old products may still linger in the home.